The village of Mougins is located in the Alpes-Maritimes department in the Southeast of France, and just a 15 minute drive from the famously elegant resort of Cannes. Mougins is both picturesque, surrounded by forests and dramatic scenery, and historic, with much of the property in Mougins being full of traditional character. The village itself consists of a great many older houses, lining narrow cobbled streets, dotted with rainbows of flowers and carefully planted trees which provide blissful shade on the hottest of Provencal days. Seemingly around every corner is a statue, both ancient and modern, and all roads in Mougins do not lead to Rome, but rather a spectacular fountain at the very heart of the old town. Property in Mougins is located in one of the prettiest hilltop villages in the area, but has much more to offer than just a beautiful village with spectacular views of the sea, mountains and countryside.

As with much of the region, food and wine are important to the culture of the area, but few places more so than Mougins, famed, as it is, for its numerous gourmet restaurants. The village hosts the ‘International Gastronomy Festival of Mougins’ ('Les Étoiles de Mougins’) every September, and several famous chefs have managed restaurants in the village. One of the restaurants, L’Amandier, is housed in perhaps the most important property in Mougins, which was the court house of the Monks of Saint Honorat in the Middle Ages, before being transformed into an almond mill in the 18th/19th centuries, leading to the name of the restaurant.

Due to the close proximity of the village to Cannes, many big Hollywood names, both past and present, have been known to frequent the village. Mougins is one of those rare places where luxury and tranquillity combine seamlessly, and much of the property in Mougins can boast of famous names beneath its roof. For many years Elizabeth Taylor hosted charity dinners for the Hollywood elite, and today Mougins is the perfect place to ‘rub shoulders with the stars’.

Property is Mougins is diverse, with large private estates suitable for the Hollywood greats, character-filled farmhouses located in the tranquil countryside, surrounded by pine forests and olive groves, and historic village houses and apartments. Some of the property in Mougins dates to the medieval period, when the village was under the control of the Monks of Saint Honorat. During this period, Mougins was a fortified village, with ramparts and a medieval wall with three gate towers. While many of these fortifications were destroyed in the 18th century, during the War of Austrian Succession, parts of the medieval wall and the Porte Sarrazine gate tower still stand. The old town was substantially extended in the early 19th century, and often village property in Mougins dates from this period, in charming narrow flower-filled streets. One of the attractions of property in Mougins is the spectacular scenery. The 260m height of the village allows 360-degree views over the Côte d'Azur. To the south there are sea views of the Mediterranean and the Bay of Cannes, to the northeast the Maritime Alps provide a stunning backdrop to the village, and to the northwest lies the village of Grasse, famous for its perfumeries and fields of lavender and roses.

In the countryside surrounding the village, property in Mougins can be found near to the beautifully maintained golf courses of the Royal Mougins Golf Resort and the Cannes-Mougins Golf Club. Beyond L’Etang de Fontmerie, which provides a large open area surrounding a small, shallow lake filled with lotus flowers, perfect for strolls and picnics, is the Valmasque Forest, which covers 427 hectares and almost surrounds the village, and is perfect for hiking and horse riding.

Despite the historic feel of the old town, property in Mougins offers a wealth of nearby facilities. As well as the elegant and modern facilities of Cannes, just a short drive away, the village has its own international school, supermarket and small shopping mall to serve the population of almost 20,000. In addition, the village’s connection with famous artists and long history ensure that there are also a great many cultural facilities. The Mougins Museum of Cultural Art was opened in May 2011 and displays a vast collection of Roman, Egyptian and Greek antiquities, alongside modern and contemporary art with a classical theme, including works by Picasso, Matisse and Damien Hirst. Among many other galleries and museums, the Galerie Elegance also exhibits work by French artists, and the long history of the village is arguably best seen by visiting some of the more important historic property in Mougins, such as the 11th century church of Saint-Jacques-le-Majeur in the heart of the village.

Property in Mougins can be easily reached by car, train and bus from Cannes. The nearest airport, Nice Côte d'Azur Airport, is just 18km away, with both domestic and international flights.

Beautiful 7 bedroom stone built Bastide, located near the village of Mougins, with 550m2 of living area, set on a plot of around 6,000m2 with amazing views towards the Bay of Cannes and the Esterel. 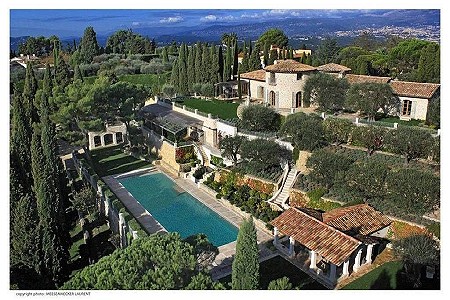 Gorgeous and substantial villa with a vast living area of 650m2, located in the historic centre of the old village of Mougins, in the heart of the classified area. This outstanding stone built ... 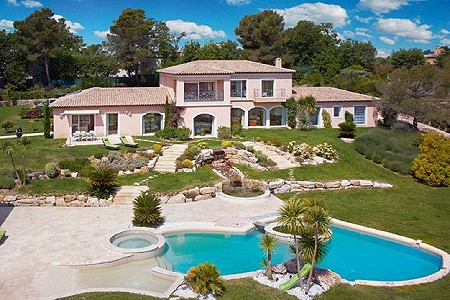 Beautiful Balinese-inspired home, ideally situated within a highly desirable area of Mougins and within walking distance of the village. With around 500m2 of living area and finished to the hig...

Full of character and charm, this immaculate one-of-a-kind 6 bedroom villa, with a total spacious living area of 500m2, is ideally situated in a quiet setting yet just a few minutes walk from the old ... 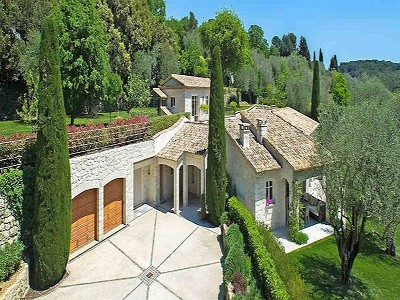 A spacious and stylish character property in Mougins with 6 bedrooms, generous landscaped grounds with infinity pool and fabulous views to the sea. This magnificent 400 years old stone house h...